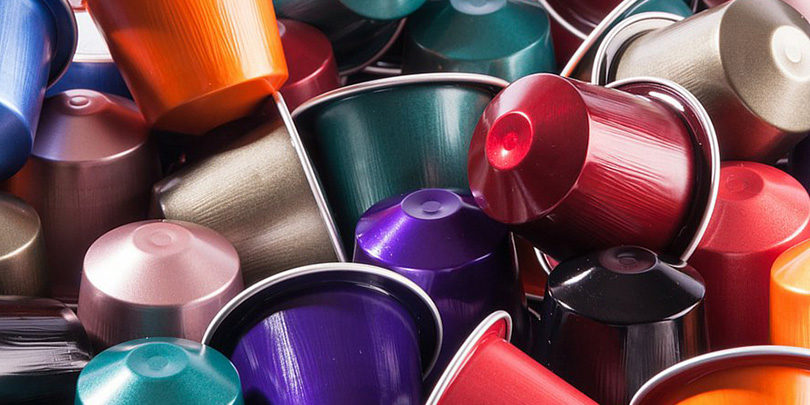 Coffee capsule contains much more of furan (a potentially carcinogenic substance) that the coffee powder from the traditional coffeemaker, According to a Spanish study. Javier Santos, Department of analytical chemistry at the University of Barcelona, explains that “This is not the same thing to prepare a coffee in a traditional coffee maker, in a coffee maker or espresso capsules, because they lead to different levels of furan”.

What are the different identified levels ? 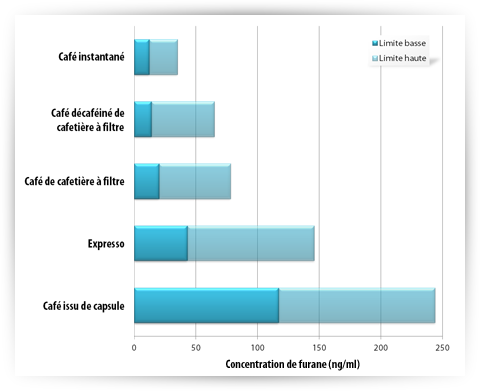 That is what the furan ?

“Furan is a colorless volatile organic compound used in some industries for the manufacture of chemical substances. This substance can also be found in low concentrations in food heat treated such as foods canned or potted. Various mechanisms can be the source of the formation of Furan in food, and it is based on the natural presence of various triggers compounds which are subject to a thermal deterioration or chemical rearrangements during food processing.” [1]

“In may 2004, the Food and Drug Administration of the United States (FDA) has detected low levels of Furan in a wider variety of foods than had been reported previously, more often in food subjected to a heat treatment such as canning or canning.” [1]

Of after Health Canada, the main foods containing high levels of furan are : coffee, soups, stews and chilis containing meat, canned pasta dishes. Note that found also at high rates in the jars for babies with meat and vegetables.

Effects of furan on health

“The international agency for research on Cancer (IARC) has classified as furan potentially carcinogenic to humans.” [1]

The risks to humans are at the moment still poorly known. Studies are underway to better know the effects of small doses of furan we ingest. In 2010, the JECFA (Joint international Committee FAO.WHO expert on food additives) has concluded that furan is worrying for health and that the research, who are current, are a priority.

How is it that there are more Furan in capsules ?

Furan, that is a very volatile compound, remains in capsules which are hermetically closed. The machine uses water under high pressure and which, with the speed of the process entails Furan in the drink.

There is apparently little risk to health

Researchers will want reassuring, should be according to them, drink 20 from cafés of capsules per day so that there is danger to health, reports Futura - sciences.com. Well before arriving at toxic doses of furan, adverse effects of caffeine will be felt.

It should be noted that l’EFSA has assessed the exposure of a European between 0.53 to 0.66 µg/kg body weight per day, While the FDA has assessed him to 0.26µg/kg.

For all other foods should know that once in the open air (cooking in a pan, recipient open, etc.) furan evaporates in the same way, thereby reducing its content.

EH!!! me who was thinking of buying this coffee and apparatus for home for the weekend, because I very enjoyed in the office

Seen the side “top of the range” the thing, I think that the brand could react a little more actively to such an announcement, rather than saying that the dose is dangerous until 20 capsules per day…

You have not finished scaring everyone…

@Régine : It is well marked in the article that there is little risk to health… It is therefore not a new very alarmist, but it is a risk that should be noted anyway.

And I who thought that the danger came from the capsule aluminum ….report to the supposed Alu/Alhzeimer correlation ….!

It is very well to inform about the evil CHOW!! nothing surprises me today, on poisons in small fire, but do we have to feed, and the common of the mortal has no way to do otherwise, then from time to time it gleans some deci dela info and one test stick, but it's tiny face these global monsters and all these lobbies that lead the world!

I buy my coffee at bio mag and I do it in a traditional coffee maker.
All these machines in capsules are gadgets and are too expensive for what it is !

C is the solution against furan and savings for the wallet I also bought my coffee Magazin bio and I do it in an Italian coffee but I confess that I have a hard time leaving my Nespresso for a time of coffee time spine for me it is very different when even the top ! In short'll have to make an effort to spend Sven ..when she did not break I will restore to this time ! Because the aluminum gives Alzheimer's and carcinogen furan no more effort Nespresso… Read more "

Just leave the coffee time, It is not death nor….

I am interested in the words of Lilli because my sister comes to bequeath me its nespresso who has already a few years in the wing (the model is even more on the site). I find good coffee but there no body (consistency). Nevertheless the danger appeals to me and I would like that Lilli says when she says that”just leave the coffee”…

Me j have more than enough of this, you have to die of something non.je don't want vovte old and shaky as l on ppudse left where on the right without that I cannot respond. I already don't smoke.

I am in the competition for quite some time, at Capmundo the capsule is pierced and is contained in a bag airtight so easier to leave the capsule is “rest” as said Lili but also not too because oxygen affect the quality.
The all-alloy does not augur good in all ways.

Is there an inter action of espresso coffee if horton disease? I think I read in a review that it be prevent this kind of coffee when you have this problem

Furan furan is a volatile organic colorless compound used in some sectors of the chemical manufacturing. This substance can also be found in low concentrations in processed foods to heat such as canned or potted food. Various mechanisms can be the source of the formation of Furan in food, and it is based on the natural presence of various triggers compounds which are subject to a thermal deterioration or chemical rearrangements during food processing. Due to indications of liver toxicity, of carcinogenicity, in laboratory animals… Read more "

FOR MY PART I PREFER COFFEE COFFEE MAKER (bio) D as much as J IMAGINE the side chemical cafes in aluminum CAPSULES.
IT INNOVATES, IT INNOVATES BUT W ITHOUT THE SLIGHTEST CONSIDERATION FOR CONSUMERS, WHICH FOR MANY, IT IS TRUE, DO S INTEREST QU TO NOVELTIES AND ARE ONLY THE BOEOTIANS IN MATTERS D EATING !!!…

“The second phase corresponds to temperatures of 150 ° to 230 ° C.. This phase is exothermic and allows the development of the brown color; it corresponds to the chemical degradation reactions of polymerization and flavor precursors.” For more information on the roasting you can consult the following page : http://www.comitefrancaisducafe.fr/index.php?option=com_content&view=article&id=42&Itemid=94

Me ! I won a Tassimo . I find great coffee , But I have a fear afraid to use it .I FURACE