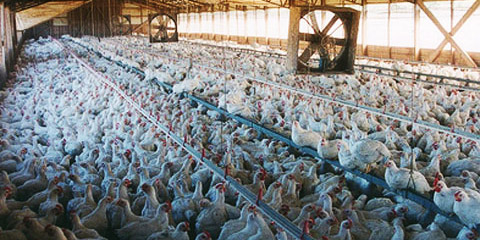 It is a blow for industrial meat producers !

Nearly half of the meat in the United States is contaminated not staphylococci Golden, According to a report published in the journal Clinical Infectious Diseases.

Researchers from Translational Genomics Research Institute collected 136 meat samples (beef, pork, chicken or Turkey) from 80 different brands in several cities of the United States (Chicago, Los Angeles, Washington, D.C., etc.). After having analysed they found that 47% the meat contained Staphylococcus aureus ! In addition, in more than half of the cases, staphylococci were resistant to at least three different types of antibiotics that are : the penicillin, Methicillin and amoxicillin.

Launches B. Price, author of the study and Director of the TGen's Center for Food Microbiology and Environmental Health says that "these results put the finger on serious problems in the way to feed livestock today to the United States"..

The systematic addition of antibiotics in farmed animals feed, to accelerate their growth and to prevent diseases, trained finally a resistance of bacteria. Breeders are constantly obliged to increase, in vain, doses of antibiotics that are also, in fine, in the meat we eat.

According to Johns Hopkins Bloomberg School of Public Health near 80% antibiotics sold in 2009 in the United States were intended for livestock (It should be noted that in France it is about 50%).

Symptoms of Staphylococcus aureus : violent vomiting, accompanied by the more generally by nausea, diarrhea and headache, rarely of fevers. During an infection widespread, sepsis can occur (serious infection which can be fatal).

Resistance of bacteria to antibiotics

End 2010, Thomas R. Frieden, Director of the centre of control and prevention of diseases (Center for Disease Control and Prevention), says “There is strong scientific evidence that there is a link between the use of antibiotics in animal feed and resistance to antibiotics in humans”. Doctors were indeed more difficult to treat with antibiotics, certain serious diseases, as with their massive use in breeding some bacteria have mutated and became resistant. Treatment is then more difficult and more expensive.

Launches B. Price says that when the staph is resistant to “three, four, five or even nine different antibiotics” There are only few options for physicians.

It is advisable to, following this study, from well to cook meat to reduce the risk. Monitor to ensure that there is a good hygiene in her kitchen also helps to reduce the risk. Caroline DeWaal, Director of food safety at the Center for Science in the Public Interest advises even from wear gloves to manipulate the meat and the rinse under water before cooking.

Obviously it would seem that to stop consuming animals from farms or the best solution, While opting for a regime that restricts the intake of meat. Animals that feed on grass, instead of mixing soy and corn, are far fewer disorders in all genres.

In any case, meat lovers can now add, the e. coli and salmonella, Golden staphylococci which complement the list of hazard potentials trained by industrial meat consumption.