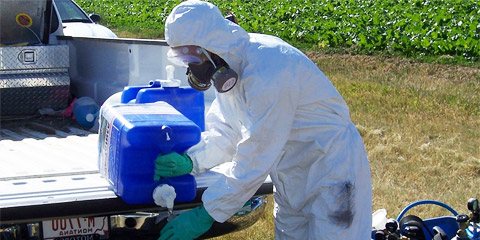 The American magazine Environmental Health Perspectives has published the 22 April, the work of three studies that link all the exposure of pregnant women pesticide and the reduction of the QI of their child. Studies have been conducted for more than ten years and have concerned 1000 women and their children.

Two studies were conducted in New York while the third was carried out in the rural population of California.

At New York's Mount Sinai Hospital and the University of Berkeley in California of similar methods were used to carry out the studies. They focused on pesticides phosphates (organophosphates) and have based their analyses on residues in the urine of pregnant women. The Berkeley researchers discovered that “whenever the quantity of organophosphate is multiplied by ten, during a pregnancy, the IQ drop 5,5 points on average in seven years children”. Mount Sinai researchers also claim that “exposure to organophosphates has negative consequences” on the sensory abilities to solve problems in children between six and nine years.

These differences persist even when differences in education, the income of households and other chemicals were discarded. Californian scientists clarify qu’There may be a gap of 7 points between the most vulnerable children and the less exposed to pesticides.

The study at Columbia University has conducted analyses on organophosphate called chlorpyrifos whom waste was collected from the umbilical cord. This pesticide was used against insect pests until his ban indoor en 2001 in the United States and in 2009 in Europe. It is however still used in agriculture. The researchers found that for the 25% most exposed to this pesticide mothers, intellectual and memory of children abilities were respectively reduced 2,7 and 5,5 points.

Virginia Rauh, responsible for the study, declares that “This loss of cognitive functioning in seven years could impact on academic performance” and adds that “problems memory could interfere with the acquisition of academic learning and understanding of a written text even if the intelligence remains in the average”.

It is obvious…
It is not normal that I am not super smart…
In addition I have the impressio nde prevalence of day by day…
Must say that since my university entrance… This is Sandwich tuna + Coca all day or almost… Our stores offer nothing. And I hate the University restaurant more expensive… And not good (Fried).
Inadmissible…