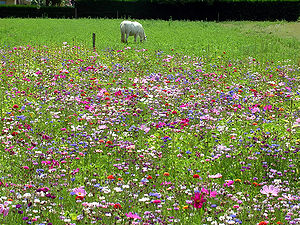 Historically, fallow is the set of cultural practices for the preparation of arable land for sowing. The term also includes, by metonymy, this earth itself.

This preparation consists of several plough whose purpose is to destroy weeds, bury the manure and speeding up the decomposition of organic matter.

Contrary to the commonly accepted, in most dictionaries, fallow is not a rest for the Earth. Indeed, the replenishment of soil mineral stocks is much slower. Without external inputs of manure, There is no renewal of fertility. Fallow is not grazed by animals as it is bare earth. As such, set-aside must be distinguished from the wasteland, where the Earth is left abandoned for a number of years and only grazed by animals.

Before the industrial era

In Europe, the practice of summerfallowing was common before the advent of modern agriculture and including mineral fertilizers. It came as part of a crop rotation and allowed, during the third year of crop rotation, so-called fallow year, replenish mineral reserves of soil through the contribution of manure and tillage. In the small region of France where it was a vernacular term (Island France, Artois, a small part of Normandy and Champagne), farmers have always known this a suite of tillage operations (ploughing, seedbeds...) intended firstly to clean the floor of weeds, then to prepare seedbed of a grain sown in autumn. Its objective even prevented the establishment of any vegetation likely to provide forage in quantity other than negligible ; and it was also very labour-intensive, both human and animal. Jacherer it was plowed several times, each labour back to the surface of the seeds of weeds that germinated, the following labour destroying these weeds.

The set-aside was named versaine in Lorraine and the Ardennes, dark or somard in Burgundy and Franche-Comté, Earth to Sun in the Dombes and Bresse, estivade in the Massif central.

Derives from the meaning

The meaning of set-aside will gradually drift under the influence of works of Botany written for landowners by urban letters. Sometimes ignoring agricultural work and the exact nature of the fallow, they see in it as an archaic practice. The confusion between fallow and wasteland appears already in the 16th century. In the 18th century, the practice of summerfallowing, deemed uneconomic, has been opposed. One of its most vigorous opponent was the Victor Yvart agronomist, at the beginning of the 19th, or even Arthur Young. The influence of Victor Yvart was decisive, in particular in the direction of Earth at rest given to fallow in dictionaries, Despite attempts at refutation of agronomists such as Pierre-Paul Deherain. During the 19th, the invention new tools limiting the proliferation of weeds and the introduction of fertilizers led to completely abandon the practice of summerfallow.

The fallow term reappeared, Since 1992 in Europe, under the common agricultural policy as an economic measure designed to limit overproduction in some cultures, including cereals. Farmers must 'freeze' a part of their land in Exchange for a compensation. They do not have the right to use this surface. However, in the event of year dry, grazing of fallow may be allowed as in 34 french in departments 2006. Similar measures exist in the United States.

The abolition of the compulsory set-aside was endorsed by Commissioner Mariann Fischer Boel en 2008, farmers can continue to implement voluntary set-aside 10 % their surface.

Farmers can use their fallow in an environmental goal, Protec with by examples hunters, beekeepers or common implementation of fallow wildlife, pollen, or flower.

This regulatory fallow has no kinship with the fallow 'history '.. There he will prefer the appellation of 'set-aside '..

The products of the hive without parsimony, It's health without pharmacy.