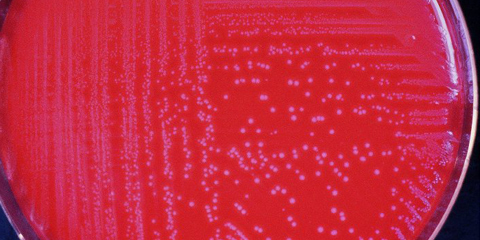 Listeria monocytogenes is a bacterium responsible for listeriosis, infectious disease rare but serious. It is the only species in the genus Listeria pathogenic for humans.

The bacteria ingested in food any can cross the intestinal wall and cause various symptoms such a seemingly benign flu condition, among women pregnant.

The symptoms are most important :

Listeria monocytogenes does not survive more than 30 minutes to + 60 ° C. Pasteurization eliminates it food. But at temperatures of refrigeration, She continues to develop unlike most other bacteria, What is a selection criterion. It resists several months in soil. It was destroyed at a pH below 4. This psychrophile germ is sensitive to most disinfectants : aldehydes, chlorinated derivatives, media and the quaternary ammonium compounds in the normal conditions of use. It is even more resistant to temperature is low and the porous surface.

The incubation period can last for 2 to 70 days after ingestion of the food, What bothers the retrospective research of the food in question during a clinical episode.

Infections are isolated or can be grouped in time and it is considered an outbreak of listeriosis. In this case, the monitoring system set up in France seeks to identify the food in question, allowing to show responsibility for the industrial pork (Rillettes and jellied pork tongue) and some cheese in recent epidemics.

« Listeriosis is a rare disease, whose frequency was decreased threefold since 1987 ; There has been 661 then identified in case 458 in 1992 and 228 in 1997 », According to Anne-Claudia Marie, Assistant Director of food hygiene in the Food Branch (EB). « This steady decline is due to the efforts of the professionals, under the aegis of control services, including through the use of generalized HACCP methods (Hazard analysis and critical control points), for the control of the Listeria risk. Industrialists have made gigantic efforts, but zero risk does not exist. Today, We are at a threshold where the efforts towards raw materials must be accompanied by appropriate information, including medical, which will allow to reduce the number of cases. »

Download : Characteristics and Sources of Listeria Monocytogenes by l’HANDLES.