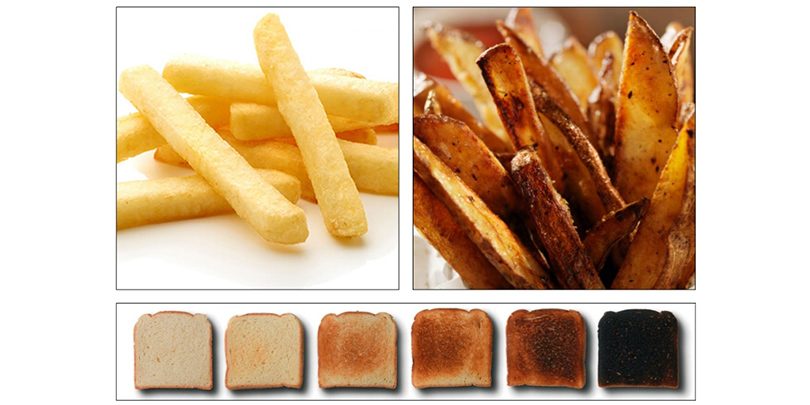 Acrylamide is a product used in the plastics industry, or which may appear spontaneously when cooking foods to more of 120 ° C.

It is a carcinogenic molecule and reprotoxic *. (*the animal, not studied in humans) which is considered by the who as posing a risk to human health. It is formed when cooking (frying, roasting...) high temperature of foods carbohydrate (starch, sugars) and protein.

2 Concentration in the food

4 Effects on the environment

4.1 Avoid the most acrylamide formation

The formation of acrylamide is strongly influenced by the cooking temperature, the moisture content of food, as well as the 'Browning '. (carbonization) products.

The substance is synthesized especially when asparagine, a natural amino acid, between reacts with natural sugars such as glucose, It is the Maillard reaction, the name of the french chemist who identified for the first time. It is precisely this reaction which gives fried foods their taste, their consistency and their brown color so characteristic.

Most concerned food by this training are primarily based on cereals and potato products (such as chips or French fries), breads and pastries and generally all products subject to high temperatures such as coffee and toasted almonds.

Concentration in the food

By lowering the pH in the corn chips or French fries by the addition of citric acid before putting in the oven, the level of acrylamide is reduced from up to 80%. Solution of citric acid or acetic acid comes to extract the precursors of the potato.

In 2002, While exposure data missing, the European Commission has started the collection of data of occurrence of acrylamide levels in food, then EFSA task in 2006, in collaboration with the Member States. The substance is considered to be effects on the nervous system, causing damage to the peripheral nervous system.

A study, funded by the EU showed a positive association between a high acrylamide levels in the blood and the development of breast cancer. The authors point to the fact that their study does not prove the existence of a direct link between this acrylamide in food and cancer but however evoke this possibility which must be confirmed by further work.

Effects on the environment

Acrylamide is biodegradable and accumulates in the environment or in the food chain. Some microorganisms are capable of degrading anaerobic or aerobic manner acrylamide; with or without light. The Rhodococcus genus for example, Converts the acrylamide acrylic acid monomer, a less toxic substance. However, significant degradation requires a minimum of a few days. The complete degradation of acrylamide can take days, weeks or months depending on the quantity of microorganisms in aqueous medium. Under aerobic conditions, the half-life of acrylamide in the rivers is 55 to 70 hours, slightly shorter than in sea water or estuary.

Avoid the most acrylamide formation

An adult would consume on average 0,4 ?g (millionth of a gram) of acrylamide per kilogram of body weight each day. Without certainties, Researchers advise however reduce the amount ingested.

For this, It is recommended that :

The CIAA (Confederation of European agrifood industries) has published and periodically updates a 'Acrylamide Toolbox '., from the knowledge available, to help the food industry to voluntarily reduce food acrylamide levels.

In molecular biology, using polymerized acrylamide (polyacrylamide) for electrophoresis. In polymer chemistry, It can be used as monomer participating in the formation of cross-linked polymers (or even gels crosslinked employees protocols).

Acrylamide has first been identified as highly reactive industrial chemical toxic, notably present in tobacco smoke. The neurotoxicity of acrylamide in humans revealed via accidental exposures or professional to high rates of this product. Acrylamide is also a carcinogen and known reprotoxic (on laboratory animals).

These are Swedish researchers who in 2002 have the first revealed its presence in food.

The former Scientific Committee on food (SCF) has issued an opinion on acrylamide in 2002, then a first study was published on acrylamide in foods. Other studies have been funded by the EU.

Acrylamide is one of risk products studied by the Scientific Panel on contaminants in the food chain (CONTAM) of the European food safety authority (EFSA), After a report of the Joint FAO/who food additives expert.

Acrylamide is rapidly absorbed and distributed in the body of the animal, and concentrated in the blood with a half life of two hours. Acrylamide is biotransformed by conjugation to glutathione before its degradation. Metabolites excreted in the urine are not toxic and represent 90% Acrylamide absorbed. In 2004, a study showed that about two hours after eating of chips containing potato 938 ± 1 µg of acrylamide, 4.5% Acrylamide is found in the urine (study on three men and three women).

Extraction of acrylamide in cold water in a ratio of 1:10 is very fast in a few minutes for hydrophilic samples such as cereals, potatoes, etc. If the sample contains a fat matrix (chocolate, peanut butter, etc), need to extract it with a non-polar solvent to remove the phase lipid.

The organic solvent extraction is an alternative method to extract water. Acetonitrile, methanol, propanol, the blend of ethanol/dichloromethane, etc are examples of polar organic solvents that have been used to extract food acrylamide. However, a hydration of food is necessary to ensure efficient retrieval.

Acrylamide is derived in 2, 3-dibromopropionamide for best sensitivity. The bromination of acrylamide occurs at 5 ° C for one night. The bromine derivative is extracted in ethyl acetate and dried with sodium sulfate and then concentrated by evaporation of the solvent.

GC - MS analysis directly without deriving gave higher scores because the acrylamide formed when parsing. Additional acrylamide formation is caused by the presence of the precursor of acrylamide. The analysis by GC - MS with derivation can give a LOQ until 5 µg/kg.

Acrylamide is a low UV chromophore. LC - UV is ideal for the analysis of the food that has a high level in acrylamide as instant noodles and potato products. LC - UV is also used to analyse residues of acrylamide in polyacrylamide, in the soil or other environmental samples.

In LC-MS/MS by electronebuliseur, cleaning of the aqueous extract using a SPE cartridge is needed to remove interference. Three main peaks are observed : m/z 72 (Molecular ion), m/z 55 (loss of NH3) and m/z 27 (loss of NH3 and C = O). The most intense peak, ion m/z 55, is used for the quantification. For identification, the spectrum of the sample is compared with that of the standard to an energy of ionization of 10eV and 20eV. The LOD can descend up to 3 µg/kg and the LOQ, up to 10 µg/kg. The linear range is 10-10000 µg/kg.