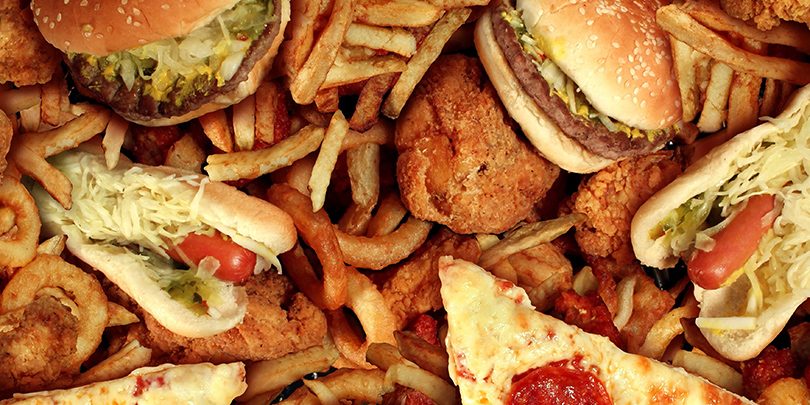 An unsaturated fatty acid can take two different geometrical forms, say 'cis' and 'trans '., which gives them different properties, and a different metabolism. The expression “TRANS” does therefore not here "transgenic" or "transformed"..

Their labelling is not compulsory today in France but will become so in the European project on nutritional profiling (initiated in 2006 and repulsed at the moment). Their use is seriously restricted in some developed countries (Denmark, Canada) or some cities (New York). After have banned them school canteens, the State of California has scheduled in July 2008 their banishment from restaurants for 2010 and preparations for 2011.

3.3 Heating or cooking of products containing or not acids trans fats

4 Effects on health and the increased cardiovascular risk

4.3 A fourth effect, on the metabolism, probably at higher dose 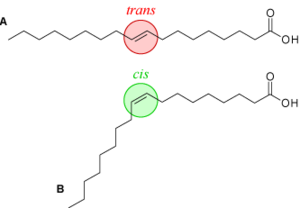 But they have a different spatial geometry : in the acid molecules trans fat, the double bonds between carbon atoms (characteristics of all unsaturated fatty acids) are trans instead of cis configuration configuration, This gives them a rather straight shape instead of be curved.

This peculiarity makes them less fluid and gives them a melting temperature higher than form cis : they are therefore more solid at room temperature, What is a property sought by the food industry.

The largest amount consumed by humans humans lies however in the industrial products as a result of partial hydrogenation of unsaturated vegetable oils, process developed in the early 1900 and having taken considerable importance in industrialized nations for the years 1950.

According to the AFSSA, the main identified contributors of fatty acids foods total trans are 60 % products of animal origin (products of origin dairy and meat of ruminants). The main foods conjugated linoleic acids identified contributors (ALC) totals are 70 % dairy products. This means that 40 % acids total trans fats and 30 % of CLA are industrial bread and pastries products, cookies, cooked dishes and chocolate bars.

Partial hydrogenation alters the molecular structure of fatty acids (replacement of double bonds - C = C- by simple - C - C bond- with two additional hydrogen atoms) and change their properties : their melting temperature increase and decrease of their rancid, What is often sought by the food industry. But it also transforms a portion of fatty acids unsaturated cis fatty acids (unsaturated) TRANS.

Consumption of fatty acids trans is not necessary, nor beneficial to health, Unlike other natural fatty acids (saturated, or unsaturated cis). Their regular consumption particularly increases the risk of cardiovascular disease, even at low doses ; as well as the risk of breast cancer. For these reasons, by many health organizations recommend to minimize possible absorption. Fatty acids trans from partial hydrogenation are generally regarded as more harmful than their natural counterparts (cis isomers).

Fatty acids trans are very controlled in some countries, they must be mentioned on the labels in many other. They do since July 2008 the subject of prohibition in the 24 000 New York City restaurants. Companies voluntarily eliminate their products or create product lines devoid of acids trans fats.

during frying of oils, a heating or, even at fairly low temperatures (for example linseed oil).

"According to the results of epidemiological studies., There is a certain relationship between the consumption of acid trans fat and cardiovascular disease but only derivatives trans partially hydrogenated oils and not those from the tissues of ruminant animals that would cause (meat, cattle less than 2 % total acids ) ».

This source “natural” represents, in France and on average, the majority of acids consumed trans fats : about 50% by milk fat, 10-12% fat from meat of ruminant animals. According to a recent study partly funded by the dairy industry (CNIEL and Nestlé), they would not clear factors of cardiovascular problems, Unlike those produced industrially; Another study published simultaneously, also with industrial cofinancing, concludes instead that they have the same effects as those produced industrially but safe at usual doses; Read about the editorial of the newspaper having published two articles[15].

The other source of acid trans fats, majority on average in Anglo-Saxon countries, as well as for specific populations (youth or adolescents p. ex.) France and southern Europe, is industrial : catalytic partial hydrogenation of polyunsaturated fatty acids.

This industrial process aims to make solid or semi-solid oils (Margarines) and less sensitive to oxidation (rancid or peroxidation).

These partially hydrogenated fats are used in the food industry

They find themselves in many processed food products, such as margarines and fats (shortening for example) used to make all kinds of prepared foods :

Heating or cooking of products containing or not acids trans fats

Partial hydrogenation, or trans isomer conversion, may also be held by heating or frying. To limit the health effects, It is therefore not enough to limit his consumption in industrial products. Should also do not overheat oils and fats not intended for this use (for example do not heat oil for seasoning).

Similarly, the passage in the oven of a pastry or pizza dough might show a rate of acids trans fat higher than that announced on the label, When this labelling exists.

Effects on health and the increased cardiovascular risk

The results of studies done since 10 years converge and indicate a significant increase in industrial cardiovascular risk in the event of excess in the diet of transfats resulting from the partial hydrogenation of vegetable oils, even more than the excess saturated fats.

According to the European food safety authority in 2004, the current state of knowledge allowed to characterize the excess acids trans fats in food mainly by three effects (observed compared to diets containing saturated fats and fatty acids unsaturated cis):

It is noted a positive association between these three effects observed and the observed cardiovascular disease risk.

These (three) negative effects would be felt even at low dose.

A fourth effect, on the metabolism, probably at higher dose

The inhibition of the conversion, essential fatty acids (for example in gamma-linolenic acid (AGL), and so dihomo-gamma-linolenic acid (DGLA)) assumes significant effects on metabolism and health of the persons concerned. There is therefore a risk to populations that ingest acids fats in bulk (as in North America).

It seems therefore appropriate to reduce as much as possible the ingestion of acid trans fats per mother pending confirmation of the negative effects of acids trans fats on fetal development.

The potentially negative effects appear to be primarily related to the elaidic acid, product in the hydrogenation of vegetable oils and oleic acid trans isomer, which is naturally cis.

"It is assumed that the absence of effect of acids trans in the ruminant would result from the transformation of the vaccenic acid (C18:1 n 7) linoleic acid conjugate (ALC) ».

The effects of CLA on health are still under study and are controversial.

But, According to the AFSSA, the largest consumers in France of fat absorb already almost 8 g/day of acid trans fats (2.5% of the total energy intake), be almost ' as much as the average North American.

In 1994, a joint FAO/who consultation of experts to examine the role of oils and the fats in human nutrition has recommended that food manufacturers reduce levels of acids trans fats in their products.

The Canada has in recent years declared war on trans fats and even published practical hints to lower the use of trans fats. In 2007, the Canada adopted a resolution to prohibit the use of acids artificial trans fat (ban on having more than 2% artificial trans fat), to become the second country after the Denmark to adopt such a measure. It should be implemented soon.

US health authorities have launched a warning official start 2005.

To go further, following an extensive campaign of insufficiently effective information, New York City has decided to ban the acids fatty in its 24 000 restaurants, under penalty of fine : "the health of the city authorities decide to require restaurants and chains like McDonald's to remove the fatty acids unsaturated trans of all their products here in July 2008 ». The McDonald's company has assured that it would be ready for this date.

California has legislated on the subject the 25 July 2008 : their use will be banned in restaurants from 2010 and in preparations to take away from 2011. Packaged products remain safe from the law but still subject to the labelling obligations.

It is estimated that the total elimination of fatty acids trans in the United States would avoid 70.000 to 100.000 deaths per year.[REF. necessary]

A draft European regulation on nutrition labelling is under discussion.

The Denmark adopted a decree-law the 11 March 2003, featuring "as from June 1 2003, acid content fatty trans oils and fats subject to Decree-Law shall not exceed 2 g by 100 grams of oil or grease.. This decree-law does not acids trans fats which exist naturally (in animal meats or dairy products). These fatty acids trans have been essentially replaced by interesterification or fractionation of palm oil, an oil which has a relatively high in saturated fat content, approximately 50%.

To the Netherlands, consumption of fatty acids trans dropped due to the publicity about their effects on health. Fatty acid content trans margarine solid table sold to the country went from a peak of 50 % in the years 1980 less than 2 % at the present time.

In France, AFSSA has in 2005 the recommendations established (down to 1 g for 100 g of product), and advocated labelling of acids trans fats. Industrialists were invited to limit the levels of acids fat in their products (non-meat, milk and derivatives). But the idea that dairy TFA are less bad than industrial TFA is widespread among the representatives of the National Assembly.

In Austria, the Minister of health, Stöger, has announced the 8 March 2009 started work on a law that sets the limits to 2%. It could enter into force in June 2009.