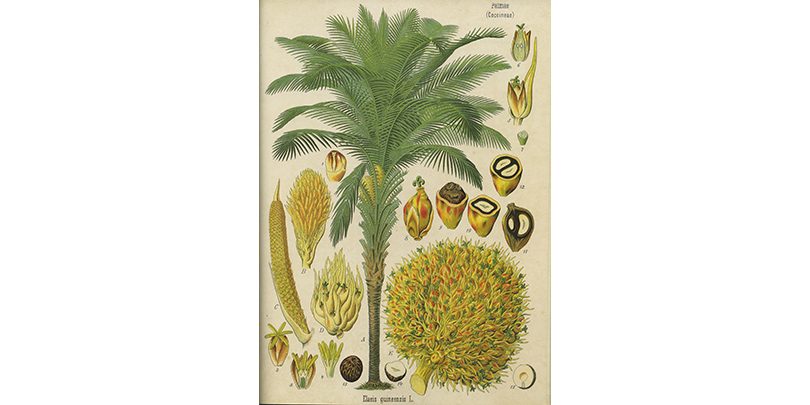 The African oil palm or Guinea eleis (Elaeis guineensis Jacq.) is a monocot of the Arecaceae family, widely cultivated for its fruits and seeds rich in oil for food and industrial use, called Palm oil.

Palm oil measurement 20 to 25 m tall, but in the palm groves of culture the elaeis do not exceed 15 metres. The trunk is the characteristic stipe of Palms, cylindrical, vertical, branched and uniform diameter.

The leaves, pinnate measure 5 to 7 m long, to very robust and spiny petiole. They form a symmetrical Crown at the top of the stipe, surrounding and protecting the vegetative bud.

The inflorescences are the spadix, located in the axil of each leaf. The plant is Monoecious with male and female spadix separated. 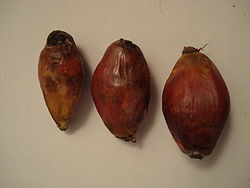 The fruit is a fleshy drupe, ovoid, sessile. The pulp or orange yellow mesocarp, contains around 50% lipids that make up palm oil. Palm nuts are grouped into plans. A plan may carry up to fifteen hundred drupes. 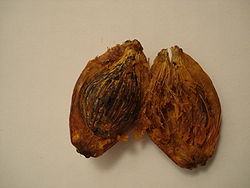 Kernel of the fruit of the oil palm

It contains a very hard core, or shell, formed by the endocarp. The kernel, consisting of the kernel and shell, weighs 1 to 6 g according to the varieties.

Inside the kernel, the seed or kernel, called palm kernel, is also rich in lipids and provides palm kernel oil. The kernel includes a seed coat thin and adherent, cartilaginous endosperm that contains approximately 50 % oil and an embryo.

This species is native to tropical Africa : Kenya, Tanzania, Uganda, Democratic Republic of the Congo, Benin, Nigeria, Senegal, Sierra Leone, Togo. His original home seems to be along the Gulf of Guinea, where there are still natural palm trees.

It is widely cultivated in all tropical areas of the world, particularly in Asia. 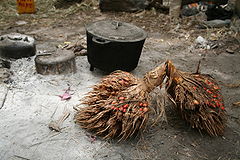 Fruit of the oil palm (Senegal) 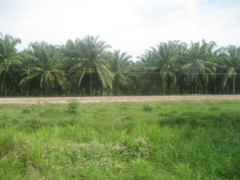 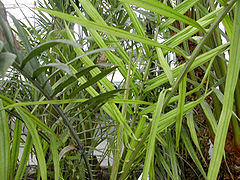 The major producers are Nigeria, Côte d'Ivoire, Cameroon and the Democratic Republic of the Congo for Africa, the Malaysia and the Indonesia (the two leading world producers 2008) for Asia, the Colombia and Ecuador for South America. In Indonesia, surfaces newly devoted to Palm oil have increased from 14 000 HA per year in the years 1970 to 340 000 between 2000 and 2009, According to the USDA. Between 1990 and 2005, new oil palm plantations occupied 1,8 million hectares in Malaysia.

The significant profitability of this crop is a major factor in deforestation in countries such as the Malaysia. The human rights violations are associated with this monoculture.

An oil palm gives fruit 12 months out of twelve, twice per month, and can produce up to 25 to 35 years. However to 20 to 25 years, Palm trees become too high and it becomes difficult to pick palm nuts; the trees are then cut and their wood is recovered.

Pulls the Palm two oils and an alcoholic beverage :

Palm oil is extracted by pressing hot from the pulp of the fruit, Red. It is, in 2006, the second most produced vegetable oil in the world after that of soybean.

It is widely used for food (frying, manufacture of margarine, fat…)

It is also widely used for the manufacture of SOAP, and in cosmetology.

Palm kernel oil is white. Extracted from the seeds kernels, with a high acidity content, It is used also in food and industry (soaps, lubricants …). These two oils are rich in saturated fatty acids and are partially in the solid state at temperate temperatures.

This liquor has wine as being from the Palm and not the vine. Palm wine is obtained from the fermentation of the SAP of Palm. Just after the harvest, It is sweet, but fermented quickly and the taste becomes more bitter. It is consumed in West Africa and Central Africa.