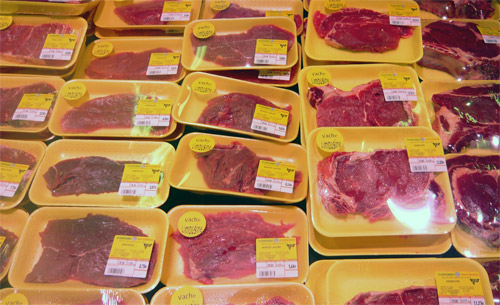 Following several reports of former employees, the ex-M. The Roquemaure Ecomarché Alcaraz (in the Gard département) and his wife were arrested by the police in November 2004.

Health services have found of the meat outdated and cheese that have been reconditioned in new packaging with a new date of consumption and fish unsold and delivered for sale a week later. They have also recovered 30 kilos of rotting meat whose part bathed in a “marinade” to secure his appearance. Some discovered products had a date limit of consumption that exceeded 65 days !

Emmanuel Alcaraz appeared this summer for “adulteration of foodstuffs, exhibition or sale of foodstuffs corrupt and harmful to health, deception on the goods causing a health hazard”. He has finally, After call, was sentenced to a term of 18 months in prison, 60 000€ fine and prohibition during 5 years a profession in the industry or food trade. His ex-wife and partner, has been sentenced to a term of 18 months ' imprisonment which 12 conditional and 35 000€ fine. Three former employees, including two butchers, have also been sentenced to suspended prison sentences.

Now here are two videos on the practice of repackaging rotting meat :

Despite a procedure that lasted six years, There has been no patient or any death unlike the famous case of 1951 the Pont Saint Esprit Baker located a few kilometres north of Roquemaure supermarket. An expert came to say to the bar of the Court of appeal, what the supermarket of Roquemaure could not technically sell rotten meat. Curiously his testimony was not at all considered in judgment, neither positive nor to refute it by the Court of appeal of Nîmes. The draft general observations 35 on the… Read more "

I have already experienced this as an employee in a large supermarket in the Department of meat and fish. It forced us to change the packaging and dates every week. I denounced this practice to the inspector and fired me immediately.