Fast food is one of the few branches of the food to get the game in these times of crisis. McDonald's, iconic group of fast food, a fact one turnover which was around the 16 billion euros in 2009 ! Valérie Cohen says, in a study conducted by consultancy Xerfi, "in a context of economic recession., and its corollary of bad news, households massively choose the establishments where the addition is the lowest.. By offering menus, for the vast majority, less than €10, fast food can easily replace a traditional restaurant for a modest family.

Fast food meets another critical need in our modern society and super active : eating fast. The dishes served very quickly, the opportunity to bring its food, even without leaving his vehicle, corresponds to the expectations of a clientele OnActivate and pressed. For the anecdote, in some fast-food restaurants in Tokyo, It does not pay the amount of what we eat but the time we spend at table !

Fast food and junk food are much synonymous, While eating you are actually ?

Behind this beautiful presentation ?

Entering the heart of the matter. It's no real surprise that fast food food is too greasy, too sweet, too salty, poor in vitamins and fibre. I would add also thatIt is very "chemical".. Many additives are present in foods. A salad, to stay fresh and appetizing, is treated with a dozen chemical products (After taoastro.ifrance.com). There are also sometimes theAcrylamide (cancerous substance) in French fries and potato chips.

And after danger - health .org, "it was recognized that. the meat is responsible for 70% of all food poisoning attached to fast-food restaurants.. We doubt well than meat, whatever it is, is not of animals frolicking in beautiful green meadows but indeed of batteries. Even if it is only a fiction, the film Fast Food Nation sticks well to the subject and shows the horror of fast-food restaurants.

In many countries the GMOs are allowed and are therefore present in the menus (soy, tomatoes, corn...) with the possible consequences that this can have. It is same with the livestock and poultry are fed.

This food, In addition to not be very healthy and very high quality, contains only two main flavors on six : sugar (meat, bread, soda) and salty (French fries, Hamburger...). For information the 6 flavors are : sugar, the sour, the bitter, the dirty, the pungent and astringent. Or this food, which is unbalanced and that contains only half of the flavors, is easily digestible. This imbalance could be, According to some nutritionists, at the origin of a body dissatisfaction and could lead to the return of a printing of hunger faster. After having swallowed a large quantity of food in a fast food haven't you noticed you had often again hungry an hour after ?

Short term this food has effects : heaviness of spirit, lethargy and greed. The long term it has effects : obesity, high blood pressure, heart disease, Diabetes, depression, disorders of the gallbladder, cancers and even result in Alzheimer's disease !

Because of too much fat and poor nutrition in nutritional elements (vitamins, fibres etc.) possible cancers are prostate cancer, lungs, pancreas, boobs and ovaries as irexpert.IR.

Fast food food is too much calorie 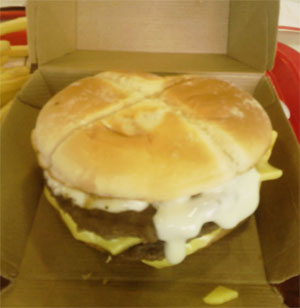 Nutritionist Pierre Dukan says that "sandwiches that offer these types of restaurants are much too rich in sugars and fats" and adds that "the service is fast., the Flash consumption and nutrient intake is much too important.. A man needs of approximately 2500 Kcal per day and a woman of approximately 2200 Kcal. A Belgian study, "Fast food"., eating fast, fatty and salty"in test-achats, studying the nutrient intake of a variety of fast food restaurants in Europe (McDonald's, Quick, Pizza Hut, KFC (Kentucky Fried Chicken), The Pain Quotidien to quote the best-known) and the menus are too much calorie. "XL Quick menus, Max Best Of of McDonald's or the KFC Buckets may peak at more of 1500 Kcal. According to LCVC (Consumption housing and living environment). Are of course affected all menus 'maxi' but also the classic menus (7/10). Note as well as a study published in Pediatrics says that a "clear display of calories would help to combat obesity in young children.. The nutritional information is available clear that at McDonald's and Quick.

According to the study, parents who know the number of calories choose lighter meals (from 102 CAL averaged) for their children. The study also notes, no surprise, that the menus are too rich in fat, fatty acids saturated (even for the healthy menus that are really "inadvisable".), acid trans fats and salt ("the salt content exceeds even often the AJR.). The message is clear.

Fast-food restaurants offer just the same berries, salads, but they are not consumed by the majority of the people. Indeed consumers prefer, in general, the classic Burger with fries and a soda.

The (very) young are the target of fast food

The surprise in children's menus

For a small child the lure of fast food just as much food to the offered gift (ex. Happy Meal from McDonald's). From after the American association CSPI (Center for Science in the Public Interest) It is a seduction strategy which is 'unfair '., misleading and illegal"and which affect the health of children by promoting a unbalanced food habit. Fast-food restaurants have understood that children are the future of their success and try so keep coming them young to everything in their lives they return to their favorite fast food. The marketing strategy is, at McDonald's for example, very well tied up. It is indeed often proposed for children in addition to the widgets, play areas and a mascot : Ronald, smiling character, thin which amuse even more children in a colorful and happy world. 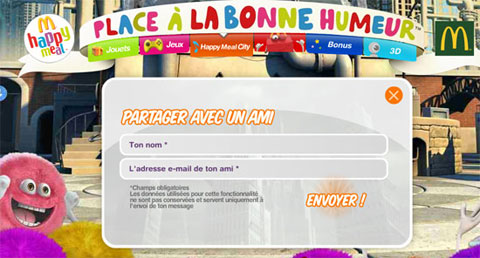 Make known to his friends

LCVC association studied the marketing aspect and measure the importance of communication through internet sites of fast food. The sites offer video games online, wallpapers with the effigy of the mark to download, to invite his friends to know the brand etc.. Proposed games allow to earn additional sandwiches or the menus 'maxi' what is 'direct incitement to over-consumption of fat and calorie products' according to the CLVC. 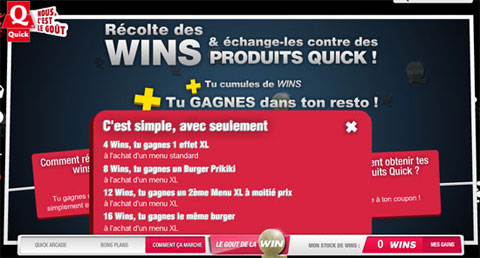 An offer which must be responsive

The LCVC calls fast-food outlets to adjust the size of the portions, remove the menus 'maxi' as well as those who are too rich in fat and calories, remove the half liters of soda and adapt the offer to the different age groups. 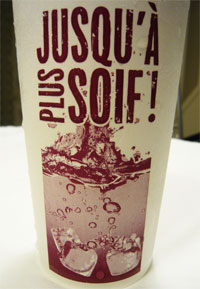 The message is clear !

Indeed, the children arrived at a certain age can quickly turn away too childish menus upon menus for adults. This increases even more the risk of excess fat, salt and sugar according to lepointsurlatable.fr. Thus according to i - dietetique.com « 60% 10-12 yrs away formulas designed for small to the benefit of other menus..

Fast food is an easy meeting point, where young people eat together and find themselves. The free WiFi at their disposal is a significant asset for a permanently connected generation. Being able to eat quickly and not very expensive is another asset size. Fast food is thus a privileged place by teenagers and students. 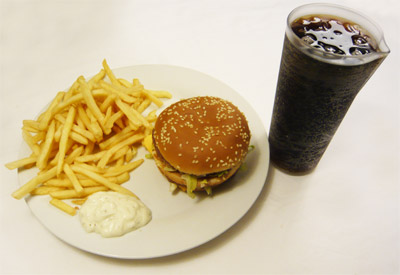 A this fast food restaurant within a radius of 150 m autour of a school would increase by 5.2% the rate of childhood obesity, This was the finding of economists at Columbia University and Berkeley in the United States. Janet Currie who led this study suggested establishing a zone where fast-food restaurants would be prohibited. This immediately reacted McDonald's who said that "limiting this type of legal businesses and. important (!), installed in the city, would set a dangerous precedent..

In the United States, 30% hospitals host their structure in a fast food restaurant ! (After i regime.com). This is fortunately not (yet) the case in France. We immediately see problems that could cause. Fast food takes full advantage of the hospital customer while benefiting from its rewarding image. "When a McDo was present in the hospital., the visitors were two times more likely to consider that the McDonalds food was healthy compared to other hospitals. Evidence that the marketing works ! » (always after i regime.com). Having become in the United States the main problem child overweight, It is difficult to imagine that in a Center medical fat and unbalanced food is made available as easily !

And the environment in everything ?

Fast food generates large amounts of waste. And after taoastro - ifrance.com, a forest area equivalent to the size of Great Britain would disappear each year for the needs of fast-food restaurants. A considerable amount of paper packaging, carton, is used for serving meals. These packagings have extremely short life, We eat food they contain for disposal in the following minutes. The LCVC encourages fast-food restaurants McDonald's and Quick to reduce their waste by offering reusable hard plastic cups that are logged (as in festivals and concerts where it works very well) but still no response on their part. 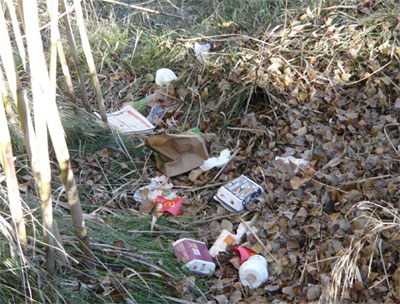 The environmental aspect is just a facade. We we also account on their websites where the actions for the environment are really limited (When they are existing). They certainly use containers that are recycled or recyclable but almost nothing is done for recycle or eliminate them at the end of life. It goes same for managing energy, water consumption... And after the Belgian study (previously cited), "everything decides in response to external pressures" and there is a "lack of transparency for the consumer». Takeaway meals consisting of multiple packagings pollute as much as they are often thrown in the wilderness where roadside...

Unless the public authorities, associations and consumers don't react and lobby to implement various measures to fast-food outlets they have still before them.

We understand it well, fast foods are synonymous with :

Now here are two excerpts of show Zone prohibited on M6 (which is never passed to the television because of too much pressure, You'll quickly understand why !)

CA me bummed ! You really eat the damn thing ! Thanks for the info and good luck !

Very good feature article, I think that the main danger of the fastfood- just as truth-telling, It is the use that you make. Do not sink into psychosis and relativize: This is not 1 burger a week which will be due to your health. Drink responsibly so. Just like alcohol, tobacco, chocolate and so on.
For a less extremist opinion and objective about the effects of fastfood restaurants on our society, I invite you to follow my blog dedicated to the issue http://fastfoodtheory.net

fast food is a Caffrey

Apparently, It doesn't bother you to support your words with the speech of a nutritionist (Pierre Dûkan) has nothing understood to the foundations of the satiety and offering food lines much more detrimental to the balance of eaters (so their health) only the food that you condemn.

Thank you, I really liked your article!

not insult the mcdo frr