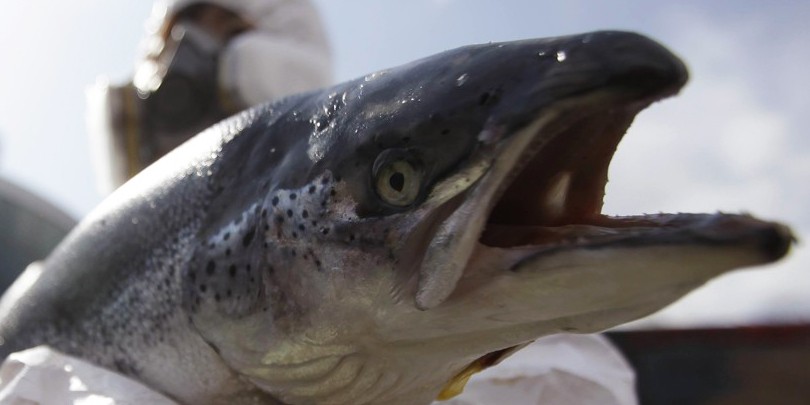 After 20 years of talks, Health authorities in the United States (FDA : Food and Drug Administration) come d & rsquo; allow the consumption of genetically modified salmon on Thursday 19 November 2015. Thus, after years of consumption of maize and soy GMOs, these fish are the first transgenic animals end up in the American plates. It s & rsquo; even acts of the authorized first transgenic animal globally for human consumption.

This salmon was created by US company AquaBounty and is named AquAdvantage. It s & rsquo; is at the base of & rsquo; a salmon & rsquo; Atlantic which two genes were added : a gene from the Chinook salmon for that & rsquo; he magnifications faster and discomfort d & rsquo; a species close to the & rsquo; eel to maintain active the first change. L & rsquo; major asset of this fish is bigger than 4 to 6 times faster and it would ready to be eaten after 19 month against 3 years for salmon & rsquo; and farms 4 years for wild salmon. 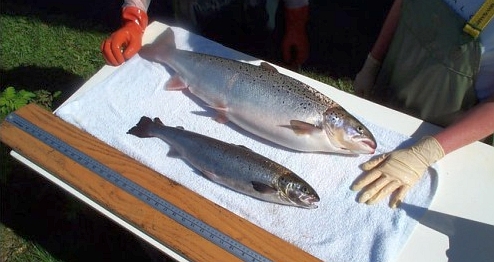 Here is, below, an extract from the Forbidden Zone story we published end 2010 about what salmon :

The FDA believes that the fish is “safe for human consumption”, and it is “also suitable for consumption and as nutritious as other salmon of & rsquo; non-transgenic Atlantic, and that & rsquo; n & rsquo it; there was no significant biological differences between the nutritional qualities of salmon AquAdvantage and others salmon & rsquo; s breeding & rsquo; Atlantic”.

When & rsquo; in 2010 already, the FDA déclarait qu’ "there are reasonable certainty that the consumption of food from this animal is not detrimental to health.. This had immediately reacted Consumer organizations such as the Food and Water Watch : "We do not see how we can ensure that this product is not harmful on the basis of four studies, three of which are conducted by the breeding company ".

According to numerous scientific publications, whose study was published in 2002 in the journal American Society of Animal Science, growth hormone, produced by transgenesis, leads to more collateral damage. Indeed, these animals have a higher tendency to become other Diabetics, to meet with immune problems, respiratory while having reduced viability. Thus, these fish will probably be sold as fillets or in cooked dishes because of their difformités. We would also note that the FDA has found itself in 2012 these fish had “high focal inflammation, en forme d&rsquo;infection” and that & rsquo; therefore they might require more & rsquo; & rsquo and antibiotics, other medicines, such as formaldehyde (which is known to be carcinogenic).

We will not dwell here on methods “Classics” current d & rsquo; salmon farms, for example in Norway, where you will find more details in the following report :

A risk “minimal” for the environment

Some researchers s & rsquo; also concerned about the formidable competition that it would be voracious fish (due to its rapid growth) if he were to accidentally end up in the & rsquo; Ocean (This reminds us Darwin's Nightmare with the Nile perch). The company AquaBounty wants to be reassuring and claims that its genetically modified salmon are sterile. But as noted infogm.org, Is sterility announced credible ? Transgenic mosquitoes supposedly "sterile", developed by Oxitec, have actually proved "somewhat" fertile, enough to transmit their genomes modified for wild populations.
The FDA states that salmon AquAdvantage can not be higher than on land in hatching tanks closed in Canada and Panama. L & rsquo; authorization “does not allow that salmon is designed and raised in the United States”.

GE salmon for all !

Several retailers said they did not commercialize genetically modified salmon (SubWay, Kroger, Trader Joe&rsquo;s, Whole Foods). In addition, several US states whose & rsquo; Alaska and California, wished to prohibit’AquAdvantage. The associations, Besides that, claimed that salmon be labeled but, under US law, a label n & rsquo; is required only when & rsquo; there “a material difference – such that & rsquo; a different nutritional profile” between the transgenic product and the like natural product. Gold, “in the case of salmon AquAdvantage, the FDA n & rsquo; not find differences”, explains the & rsquo; agency. In this context how do you know what & rsquo; eat ?

How that multinationals could sell their genetically modified products, while only a minority of people would consume ? Do you have the answer.

Are we protected in Europe ?

Passed under a deafening silence by our media, the treaties are being signed and put in place our governments have at least enough to make you think.

Here is an example TAFFETA :

The alarming news, it is the existence of US.