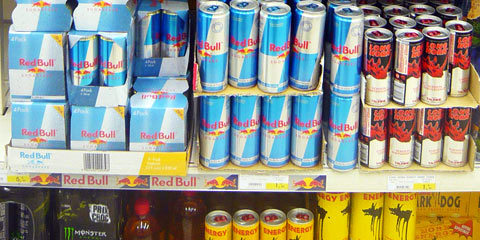 With a market which amounted 2006 to 3,4 billion US dollars and with the appearance of 500 new brands this year, the energy drink is visibly niche.

The advertising campaigns of these energy drinks make reference to extreme sports highlighting high-level athletes. Manufacturers rely on the power of their drinks with stimulating ingredients such as caffeine, guarana (Caffeine-containing plant), sugar (Glucuronolactone for example), taurine, arginine and vitamins.

The promise of these drinks is clearly the performance.

It you “gives you wings” (Red Bull), stimulate your mind and body. The energy drinks target clearly the adolescents and young adults who consume mostly in bars, discos, sporting events (MOUNTAIN BIKING, Kite surfing, motor sports etc.) or during periods of exams to concentrate.

Since their introduction on the market studies been done on the impact they have on health in General, but also when they are consumed before a sport or mixed with alcohol.

Effects of energy drinks in general :

It should be remembered that these drinks are deprecated in children, adolescents and pregnant or lactating women.

These drinks are highly acidic and very sweet (the equivalent of 5 sugars for a 250ml can) which attack the tooth enamel causing cavities to repeat.

Other adverse effects associated with excessive consumption of energy drinks are vomiting, heart rhythm disorders and nausea (more details below).

Drinks take advantage, among others, the combined sugar and caffeine to provide energy. They aren't when they all adapted to the practice of sport and are literally adverse as we shall see.

Indeed Dr Frederick the IRBMS Maton (Regional biology and Sports Medicine Institute) fact analysis of active principles of a bobbin of “Red Bull” 250 ml comparing doses made by the drink and the doses required for the proper functioning of the body while noting their effects on health. See one by one these active principles :

Caffeine contained in a can (80mg) is near the dose or are beginning to feel its adverse (between 100 and 160mg) knowing that the upper limit of consumption of caffeine per day is 200 mg. There is thus a risk to absorb a toxic dose of caffeine which leads to bad side effects and problems :

– Urinary leakage of minerals (magnesium, sodium, calcium) What can accentuate electrolyte disorders during effort, causing injury and decreasing the recovery. The effect diuretic resulted when his dehydration.

Also note that caffeine is not a fat burner and therefore has only a low utility in a period of “dry” Bodybuilding for example.

Taurine (extracted bile of Bull and not the testicles as the rumor) contained in a bobbin is 1000mg. However with a balanced diet is sometimes around 120 mg per day not to exceed 180 mg per day (with a bobbin is multiplied by more of 5 the maximum daily dose absorbed in normal times). No study shows a any positive effect of a “overdose” taurine. It may, however, concern that at a dose as high taurine could have a reverse effect (oxidative Pro) like many other antioxidants when eaten in overdose.

The Glucuronolactone (a sugar naturally found in the body) is present at height of 600mg per bobbin while natural intake is 1 to 2mg per day, approximately the equivalent of 600 days of dietary intake ! A high dose the Glucuronolactone is toxic for the kidneys.

The needs in vitamin B are normally covered by foodstuffs of animal origin, There are “any profit in health, or performance” by increasing these contributions according to the IRBMS.

Overdosing in vitamin B could, even though the toxicity was not clearly demonstrated, behavioural neuro problems (behavioural and memory problems).

Nicotinic Acid (20mg per bobbin) is naturally present in the body as made by the liver. We have thus not helpful to eat in our diet. The dose of a bobbin is on the other hand near the limit of security (33mg per day).

Arginine (an amino acid) present in the “Bullit” has a utility controversial among sportsmen, and in high doses unbalancing the circulating pool of amino acids and break their balance may.

Mixed in alcohol they mask the signs of intoxication of the consumer with all the risks that are related. "When you drink too much alcohol., the body sends signs. It has a dry mouth, a small headache… Drinks cancel these signals. And since you feel good, continue to drink." Hubert Sacy, Director general of Éduc ' alcohol (Canada). This joins the opinion of AFSSA that discourages also this mix.

Thus you will feel capable of driving his car despite excessive alcohol for example, injure without measuring the gravity or to have sexual intercourse without protection from Johanne Dubé, the youth clinic nurse.

How are energy drinks appeared in France ?

We remember all the controversy over the marketing of the “Red Bull” in France.

Why Red Bull ? Just because it is the stereotype of the energy drinks which has alone 52% for early market share 2010 (After www.rayon-Boissons.com).

This product was marketed for many years abroad, but was problematic in France (banned from 1996). In may 2008 the Red Bull (a version without Taurine and Glucuronolactone) eventually be placed on the french market because the State was unable to demonstrate the harmfulness of this drink. Starting from the 15 July 2008 It is the “true” Red Bull, which is marketed. Demand explodes on the part of consumers and prices rise.

The energy drinks market was pounding gradually encourages manufacturer them to constantly innovate. The latest find is what is called the “shots” directly from the United States. You can now you rebooster with these 5cl mini-bouteilles or 2.5 cl who drink in “Add-in” conventional cans according to the Burn from Coca-Cola Product Manager, Cloe Von Kraufe. In fact they can be transported anywhere, in a Pocket, in a handbag to be drunk at any time of the day (or of the night).

These small cans are extremely powerful : they are about 5 more concentrated than conventional cans times ! Absorb in one or two SIPs a drink containing a huge amount of caffeine and other stimulants is obviously hazardous to health as to drink one might be tempted to drink more. The consumption housing Cadre de Vie association (LCVC) highlights a study in the United States of 2008 that is an increase of cases of poisoning by energy-drink caffeine. Some brands have been withdrawn from the market by the Canada, England and the Australia because their products were clearly harmful to health.

The nutrition in Coca-Cola officer recommends “do not exceed more than one shot per day” and discourages consumption for children and for people sensitive to caffeine. This does not prevent the Group “to organize student parties sponsored by Burn energy that obviously encourages youth to combine energy drinks with alcohol” based on agoravox.fr. The distributor of Dark Dog when invites him to “dilute a volume shooter in three volumes of the liquid of your choice” According to agoravox.fr.

Small cans were, 6 months after their launch, the results rather mixed and are even a “flop” According to RADIUS - boissons.com. Indeed, little distributors sell these mini-canettes because they are frequently stolen because of their small size ! An anti-theft system or a better positioning, close to caisses (After the manner of chewing gum) is envisaged so that there are fewer flights and a “Pulse” purchase.

More generally it should be noted that the energy drink market has probably arrived at its peak. Consumers are increasingly aware of the composition “chemical” and potentially “dangerous” of these energy drinks and will may be need to consume other types of beverages.

Nice website, nice design, very interesting articles. This site teaches us and enlightens us on things we do not know or half. Strongly next articles and good continuation !

Thank you very much ! The goal is to post about a folder per week. And to add from time to time small short.
Be faithful !

I am not a scientist or a researcher, therefore parmit all data and research that I can do I do it's always not if caffeine makes you fat or weight loss .

Now it has turned out that these energy drinks can kill people. I would totally ban them.

Ptdr the morons, also say that we are going to get AIDS, you are crazy in the comments.

It’s a shame that people can sell their place at Lydl to children of 12 ,13years old I fight with my little boy who doesn't drink this drink !!! But unfortunately does like his little friends and buys Pcq c is not expensive !!!!