Four Loko, the trademark Phusion Projects, is an energy drink marketed in the United States and is currently much talk about her. The name “Oven” (which means four in french) comes from its four main ingredients that are : caffeine, taurine, guarana and alcohol.

This drink is also called “blackout in a can” or “liquid cocaine” so its effects are devastating ! Four Loko cans have a capacity of almost 700ml each, almost 3 cans of Red Bull. A single bobbin contains as much caffeine as 2 mugs of coffee and with its 12 ° of alcohol that 3 beer bottles !

Young people are the target

With its bright colors and attractive the drink Four Loko clearly target teenagers and students. This drink comes in many flavors : lemon, red fruits, Orange, peach, etc. The taste, however, is, According to some testimonies, horrible car looks like “drugs mixed with blotted daubee beer from the ground of a bar”. This does not slow down young people who throw themselves literally above. Another argument marketing, a can of Four Loko is two times cheaper than a can of classic energy drink. This is a godsend for all teens and students who have no money. 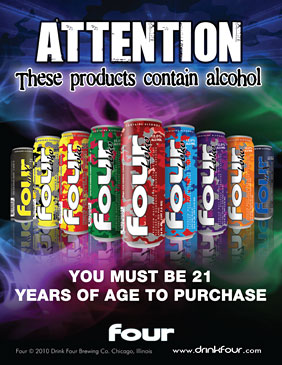 In a previous folder on the energy drinks (searchable here), We saw the drinks only and accompanied by alcohol health risks. Recall that the energy drink hides the signs of alcohol. The person will be no awareness of his drunkenness and continue drinking, exposing themselves to enormous risks of accidents all kinds.

That says the Government ?

After at least one death and a number alarming youth having ethyl comas, from multiple universities and two States of the country, Oklahoma and Michigan, permanently banned the drink from the sale. For information, with its stricter alcohol policy, Utah is the only State to never marketed this drink.

The 17 November, the FDA (Food and Drug Administration) has stated that “the combination of caffeine and alcohol is obviously a problem of public health”. All drinks drinks containing caffeine, Guarana and taurine have been removed displays. This measure did not prevent a good number of people to buy huge stocks of Four Loko, just prior to the ban, for resale then illegally on the Internet.

The ban has even propelled sales of the drink because the media are talking about almost daily. The popularity of this drink is felt to the clip with the image of the drink on YouTube has been viewed over 1,6 million times. Videos of consumers drinking a maximum of cans in a minimum of time are scrambling on this same site.

The point of view of the mark

Phusion Projects defends himself, on its Internet site, stating that drinking a can of Four Loko is no different “with a coffee after a meal 2 glasses of wine”. A topic “Consume responsible” is also good on the site. 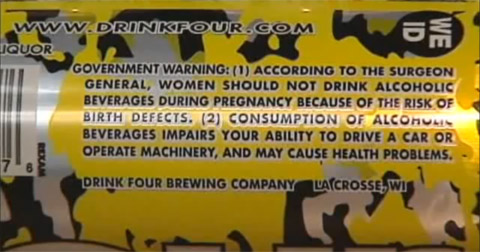 The drink is covered with mentions “can cause health problems”, “not recommended for pregnant women”, etc. An identity card is also requested for the purchase of this alcoholic beverage (should have in the United States more than 21 years to consume). All this does not prevent minors from drinking until they are sick.

To follow the news overseas, This drink is in the heart of a virulent debate. Unless a new law will completely prohibit this type of beverages, the brand has still ahead.

Here is a report about Four Loko (English) :