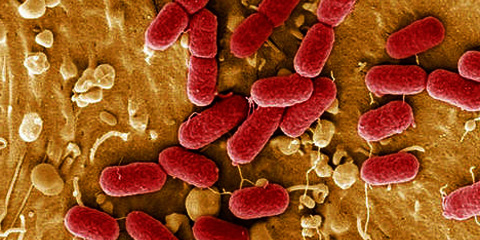 While the cucumber from Spain was, a few days ago, the origin of the epidemic raging at this time, Here it is now exonerated by the European reference laboratory for E.Coli, based in Italy. This laboratory says, Indeed, Qu’There is no «» no evidence that vegetables are at the origin of the infection » and adds that «» the analyses carried out on samples of suspicious cucumbers […] have also definitively clarified that they were not contaminated ».

Wrath of the Spanish farmers exporting

The affirmation of the Germany holding Spanish cucumbers occurred too quickly ? What were they based their conclusions ? The European laboratory denounces one « unjustified alarmism » on this subject. The Spanish agricultural sector has in any case terribly suffered. Some Spanish farmers went specially to Hamburg to shout their anger against the City State.

German Chancellor, Angela Merkel, would be willing to help financially the agricultural sector in Spain, reports TF1. According to farmers and exporters of fruits and vegetables, the loss would amount to 200 million euros per week and the Spanish Government adds that this case would threaten 70 000 jobs.

The cause of the contamination is still unknown

As the epidemic progresses and done more in addition to victims, especially in Germany, the origin of the contamination is still a mystery. 19 deaths have been recorded (18 in Germany and 1 in Sweden) and 1733 people have been infected, in Germany, Since the beginning of the epidemic reports l’Express.

In an attempt to find the source of the problem, the Robert-Koch Institute (RKI), the persons contaminated with questionnaires. endless "we reported ComputerWeekly.com. Apparently, the tomato was the most consumed vegetable by people with. An unconfirmed rumor claimed meanwhile that the bacteria would be mediated by the meat. No one takes the risk of making hasty conclusions once again, then the food (or food) source of the outbreak is still unknown.

The strain to however was discovered

The code name for Enterohaemorrhagic Escherichia Coli bacterium (EHEC), is : O 104 H4. This strain, which is very rare, would have taken another strain of e. coli genes, making it very aggressive and virulent ! It is also resistant to many antibiotics What greatly complicates the treatment of disease and concerned scientists from around the world. Dr. Robert Tauxe, Deputy Director of the American Center for prevention and control of diseases, estimated that This strain is probably one of the most deadly ever recorded reports l’Express.FR. He says : « We do not understand why it is so resistant ».

The spread of the epidemic would stabilise ?

The nephrologist, Reinhardt Brunkhorst, goes rather in this direction by stating that «» We just feel that the spread of the epidemic is slowing even if for the moment no data is clearly in this sense ».

L’InVS (Institut National de Veille Sanitaire) has today confirmed that there are altogether ten french suffering from bloody diarrhea since the beginning of the epidemic. All these people have stayed or are resident in Germany. The DGS (Directorate-General for health) has stated that their health condition is not serious because none of them has shown kidney disorders (SHU), This is confirmed by the InVS : « No cases of hemolytic uremic syndrome (SHU) the German epidemic-related ' been said.

Here's a little reminder proposed by l’AFP about E.Coli contamination : 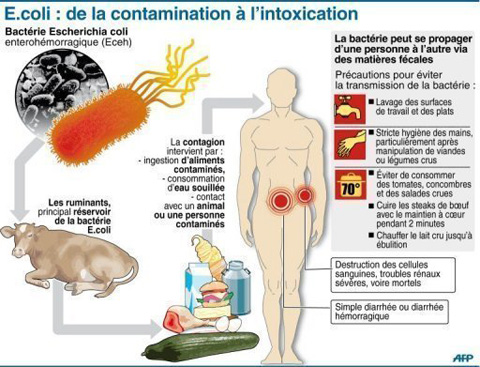 THE e. coli BACTERIUM is destroyed to heat approximately 60 ° C or a T ° C low?

resiste you it was freezing ? Thanks for your reply it T ° C and how long

Hello,
INRA explains that "cooking eliminates the EHEC. (Enterohaemorrhagic Escherichia Coli) as soon as 5-10 minutes to 60-61 ° C but that freezing does not kill the bacteria.
Kind regards