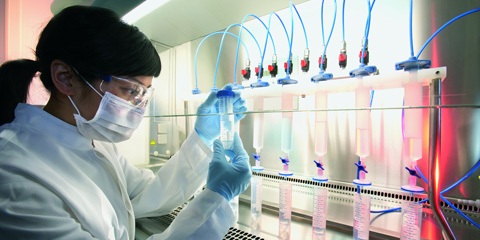 The European food safety authority (EFSA) would replace the current system of tests on chemicals with a fixed exposure dose SPT called for " Threshold of toxicological concern » (TTC in English for " Threshold of Toxicological Concern »). An adult can thus, According to EFSA, consume daily and during all his life a chemical substance up to a certain amount, defined by the SPT, without experiencing adverse effects.

The SPT approach is currently used by EFSA to evaluate the flavouring substances and metabolites of pesticides in groundwater. The Agency wishes to extend this approach to the vast majority of chemicals and thus use it for substances in food. EFSA explained that " the SPT approach is a screening tool useful to carry out a qualitative assessment of risks. It also allows effective use of available resources and the potential reductions of animal experimentation ». The agency would dedicate the resource economy to "priority" substances.

This announcement has caused indignation of Generations Futures car, According to her, « the SPT approach is a proposal prepared by the pesticide industry and is far from being safe ». Indeed, This tool is based on old data that are provided by the industries themselves ! These data, who are at all relevant, can not be verified by EFSA as too old studies are not recoverable ! Independent studies, therefore not provided by manufacturers, are not included in the SPT. Future Generations adds that "level of SPT is calculated by excluding the most toxic chemicals (5e percentile) the database. This means that many chemicals, based on the same industry, show toxic effects below this level “safe” SPT..

About endocrine disruptors, the precise combination that " doses 10, 100, 1000 and even up to 7500 lower that the value of the SPT have thus been revealed toxic in independent studies ».

"If the SPT was applied to the most dangerous class of chemicals., then almost all pesticides would suddenly be classified 'safe' to humans and no test would not be necessary !' said François Veillerette, spokesman for Generations Futures. "It is incredible that the EFSA., that purports to be a scientific Institute of high level, is about to adopt This dangerous proposal of the chemical industry not based on science. The blind trust of EFSA for the industry has also allowed industry lobbyists and other known proponents of the HFA to integrate an expert panel to examine the SPT approach. This is unacceptable !» add you there.