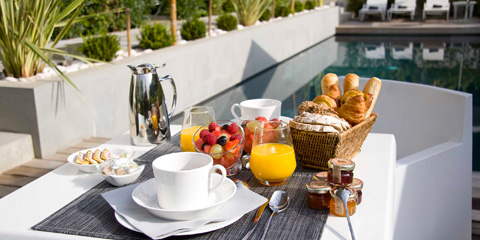 Thursday 30 June, l’HANDLES (National Agency of food safety, environment and labour) has published the results of the second total diet study (EAT 2). This study, very large-scale, took place during 4 years and is based on the research of 445 chemical substances (pesticides, heavy metals, contaminants of human activities, Phyto-estrogen, additives, etc.), in 20 000 food resulting in 250 000 analyses. 283 studied substances are pesticides.

To avoid ingesting substances at doses toxic, ANSES recommends to diversify its power supply. « There is not in itself, good or bad food "says the Director of ANSES, Marc Mortureux.

The Agency concludes : « This study shows that chemical and nutritional risks can be minimized by avoiding regularly consume a small number of foods in large quantities ». Indeed, There are risks when certain people regularly eat a specific food very contaminated or, on the other hand, bit toxic but consumed foods in large quantities. Marc Mortureux stresses that «» The study highlights certain risks long term for adolescents when their diet is focused unduly on cereal-based products (including pasta), fries and chips ».

Generally less consumed foods but potentially toxic for the consumers :

We may regret that the report of the study does not specify more accurately how much a food can be consumed without being toxic to the body.

Include PCBs and dioxins in 86% tested products but the exposure of the population in summer sharply reduced. These PCBs and dioxins are found mainly in the fatty fish (mackerel, herring, sardine, salmon, tuna, etc.). There are also of organic mercury in tuna. It is recommended to eat at least twice per week of fish varying both the species consumed and the provenance of the fish. You should know that a pregnant woman should also eat at least once per month for tuna.

The Agency also notes that for certain substances, It has not been possible to conclude because there is not, at the present time, of sufficiently precise analytical methods or because toxicological values are not quite successful. The Figaro reports that it concerns. 38 pesticide residues, […] six mycotoxins as well as inorganic mercury, Tin, Gallium, germanium, strontium, money, tellurium and vanadium, some perfluorinated compounds..

The report of the ANSES is reassuring : « For 85% substances that could be the subject of an assessment, the risk may be set aside for the general population, the evaluation of exposures of consumers still remaining below the available toxicological reference values (VTR) ». On the other hand, for a dozen of substances, the risk of toxicological reference values are exceeded. cannot be excluded ». The effect of these accumulated substances has also not been studied.

The association Generations Futures deplores the fact that the study reveals exactly the risk incurred by the consumer. In addition, She noted that the exposure values are compared with toxicological reference values (VTR) who are often inaccurate (as we can see in the documentary «» Our daily Poison » by Marie-Monique Robin). « The toxicological reference values are sometimes not protective of populations, the study does not take into account the interaction of molecules between them nor the particular mode of action of endocrine disrupters, Finally some contaminants are not studied, as bisphenol A, aspartame, antibiotics... » deplores Generations Futures.

The association had, in December, published a report on the exposure of children to chemicals and revealed qu’in the space of 24 hours, a child is likely to be exposed, by his power, to 81 different chemicals ! 47 These substances are suspected to be carcinogenic, 5 are classified carcinogenic some and 37 are suspected endocrine disruptors (alter the hormonal system). The report also stated that "The effects of pesticide mixtures were from. 150 to 1600 times larger than the effects of individual pesticides.. We call this effect "cocktail"., a concept well known now but very rarely taken into account in studies that merely generally analyze the different chemical substances in isolation based on much acceptable limits often obsolete.

Laurent Chevallier, nutritionist at the RES (Environment health network) declares that This report is useful but little usable in practice and regrets that it does not give more recommendations. to frame the practices of agro-food industry which are partly to review » reports Romandie.

Image of the website www.Hotel-Le-mandala-Saint-Tropez.com, all rights regarding the image they are reserved.

“Manger 5 fruits and vegetables per day !” … With or without pesticides ?
Related to your article, a series of drawings wink to the work of René Magritte “This is not an Apple”
The legend differs however. Under the image of a fruit or a vegetable the exhaustive list of phytosanitary products that apples contain, strawberries, potato … : ” This is Abamectin , Acequinocyl , Clofentezine , Etoxazole …”
To discover the series in progress : https://1011-art.blogspot.com/p/hommage-magritte.html